In 2014, nearly 41% of the approximately 320,000 cases from tickets issued to people for low-level offenses in New York City (NYC) had recipients who did not appear in court or resolve their summons by mail. This represents approximately 130,000 missed court dates for these offenses. Regardless of the offense severity (summonses are issued for offenses ranging from things like littering on the street or sidewalk to drinking in public), failure to appear in court automatically results in the issuance of an arrest warrant. Because warrants are costly and burdensome for both the criminal justice system and recipients, the NYC Mayor’s Office of Criminal Justice—in partnership with the New York City Police Department and New York State Unified Court System Office of Court Administration—asked ideas42 and the University of Chicago Crime Lab to design and implement inexpensive, scalable solutions to reduce the failure to appear (FTA) rate.

We tackled this problem using a two-sided approach. First, we redesigned the NYC summons form to make the most relevant information stand out, making it easier for people to respond appropriately. In the new form, important information about one’s court date and location is moved to the top, the negative consequence of failing to act is boldly displayed, and clear language encourages recipients to show up to court or plead by mail.

Second, we created text message reminders. We identified behavioral barriers leading many to miss their court dates: people forget, they have mistaken beliefs about how often other people skip court, they see a mismatch between minor offenses and the obligation to appear in court, and they overweigh the immediate hassles of attending court and ignore the downstream consequences. We then designed different reminders targeted at helping recipients overcome these barriers.

From March 2016 to September 2017 we implemented and evaluated our interventions, and showed that both have significant and positive effects on appearance rates. We found that behavioral redesign of the form reduced FTA by 13%. This form has already been scaled system-wide to all criminal court summonses, and, based on 2014 figures, translates to preventing roughly 17,000 arrest warrants per year.

Using a randomized controlled trial, we found that the most effective reminder messaging reduced FTA by 26% relative to receiving no messages. Looking 30 days after the court date, the most effective messaging reduced open warrants by 32% relative to receiving no messages. This stems from both reducing FTA on the scheduled court date as well as court appearances after the FTA to clear the resulting warrant. These results are in addition to the gains already realized from the summons form redesign. The most effective messaging combined information on the consequences of not showing up to court, what to expect at court, and plan-making elements. 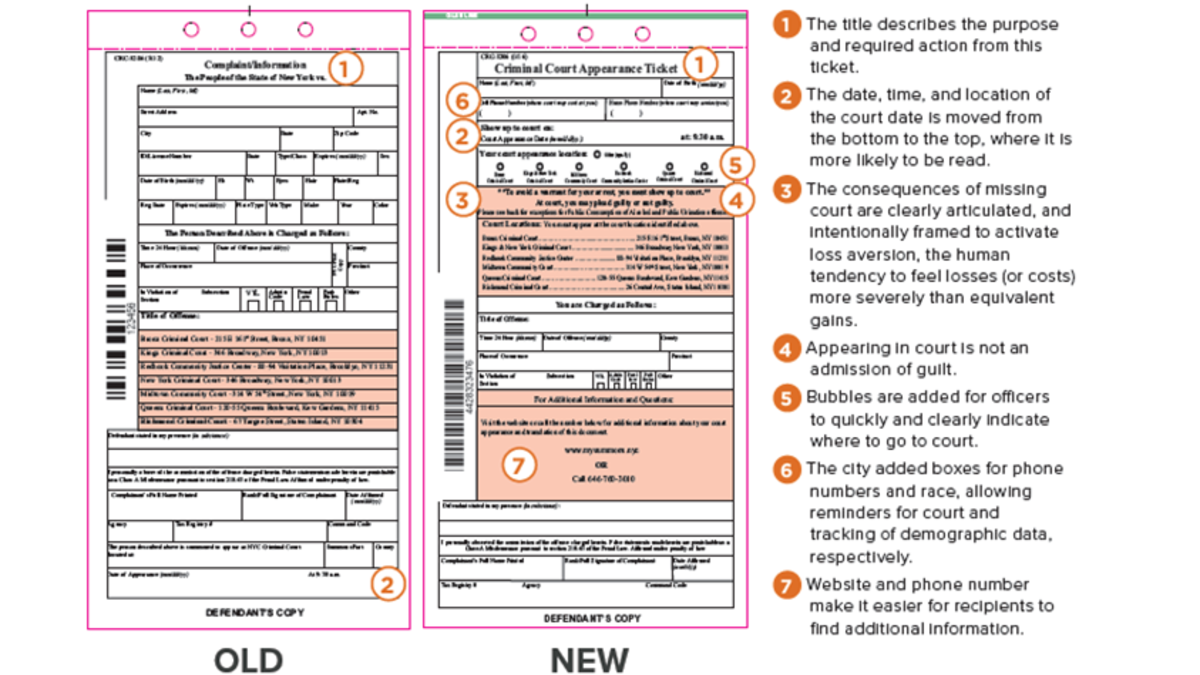 The Crime Lab partners with civic and community leaders to design, test, and scale promising programs and policies to reduce crime and violence. If you have a media inquiry, please reach out to John Williams: jwilliams100@uchicago.edu

The Education Lab partners with civic and community leaders to identify, rigorously evaluate, and learn how to scale programs and policies that improve education in America’s most distressed urban neighborhoods.

The Energy and Environment Lab partners with civic and community leaders to identify, rigorously evaluate, and help scale programs and policies that reduce pollution, conserve limited natural resources, and improve environmental outcomes, while ensuring access to reliable and affordable energy.

The Health Lab partners with civic and community leaders to identify, rigorously evaluate, and help scale programs and policies that improve health outcomes, particularly for low-income and disadvantaged urban residents.

The Inclusive Economy Lab partners with policymakers, community-based organizations and others to generate rigorous evidence that leads to greater economic opportunity for communities harmed by disinvestment and segregation.